Turmeric is a natural wonder in the healing world and has been used as a powerful anti-inflammatory, antioxidant, and anti-depressant since ancient times. The main component in turmeric, curcumin, has phenomenal anti-cancer properties.  Just remember that the CURCUMIN in turmeric is super healthy but is 2000 times more bioavailable when combined with BLACK PEPPER and because it is fat-soluble, it is also great to combine it with a HEALTHY FAT, so drink this while snaking on a scoop of almond butter or my delicious Tahini Brownies (on the website too). HEATING TURMERIC also makes the curcumin more bioavailable. So in other words, munching on a raw piece of turmeric is MUCH less good for you than cooking the turmeric, combining it with healthy fat and sprinkling it with black pepper.
GO FOR IT! 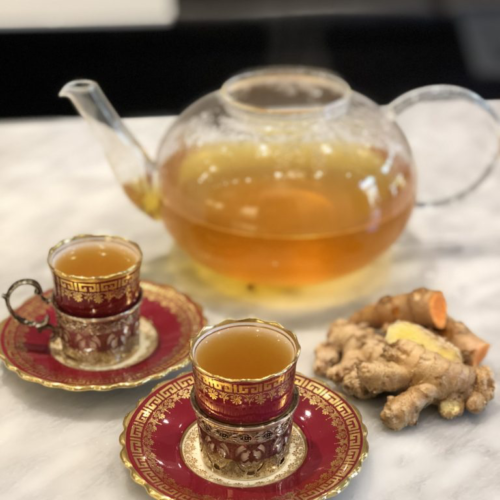 I don’t peel the ginger or turmeric, that’s a total pain in the $%#@, rather I srub it clean and usually buy it organic.