Almond butter is super easy to make and keeps for a while in your fridge.

Almonds are one of the most nutrient-dense foods and are a fantastic source of antioxidants, vitamin E, protein, magnesium, fiber, calcium, and healthy fats.

I add a lot of cinnamon to this almond butter because cinnamon is so good for you!

Cinnamon is widely known as a  functional food, a food that has a potentially positive effect on health beyond basic nutrition, or a food that promotes optimal health and helps reduce the risk of disease.

Cinnamon has been used as a medicine in traditional Ayurvedic and Chinese medicine for centuries. Its benefits have been linked to digestion and stomach upset and have been used for treating heartburn, indigestion, and nausea.  But what cinnamon is most widely talked about is its ability to help balance blood sugar.  Cinnamon has a naturally sweet taste so for those of you who are trying to decrease sugar in your life; cinnamon will satisfy that sweet craving.  Sprinkle away!!

I love this Cacao Almond Butter version because it tastes so good and because cacao is a superfood.     Raw cacao has tremendous antioxidant benefits, is a fantastic source of magnesium, has tons of calcium, and has been known to boost your energy and improve mood (and even put you “in the mood”, if you know what I mean)!!  If you are still not convinced, taste it!

But… CACAO is not COCOA; please note the spelling!  According to Sara Wilson, the difference between CACAO and COCOA is  “raw cacao is made by cold-pressing un-roasted cacao beans. The process keeps the living enzymes in the cacao and removes the fat (cacao butter).   Cocoa looks the same but it’s not. Cocoa powder is raw cacao that’s been roasted at high temperatures. Sadly, roasting changes the molecular structure of the cacao bean, reducing the enzyme content and lowering the overall nutritional value.”

Store both the Almond Butter and Cacao Almond Butter in the refrigerator.  Did you know that ALL nuts and seeds (nut flours too) should be stored in the fridge or freezer?  Because of the high (healthy) fat content in nuts and seeds, they can go rancid in a short time. 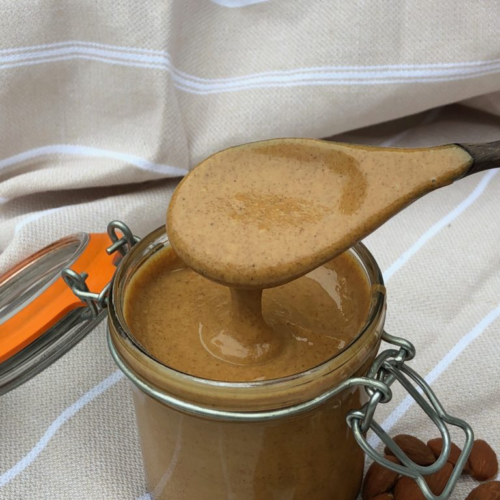 Store in the refrigerator.  Did you know that ALL nuts and seeds (nut flours too) should be stored in the fridge or freezer?  Because of the high (healthy) fat content in nuts and seeds, they can go rancid in a short time.