I have to be honest. I was a real skeptic when it came to the instant pot in general but especially for cooking traditional recipes such as chicken soup.  I was sure it would never be as good as the slow cooked golden broth that my grandmother would make.  Her soup is a legacy in which we all take such pride.  Our attempts to emulate her perfection have resulted in many animated discussions, friendly competitions, comparisons, criticisms, and praise for our pots of liquid gold.

If you don’t need or want a huge batch of chicken soup, the instant pot is perfect for making smaller batches and makes it worth buying the pot for this alone!  There are a few rules you need to follow, so don’t play around too much with the recipe.

This is my Instant Pot and I love it! Instant Pot Duo 7-in-1 Multi-Use Programmable Pressure Cooker, 8 Quart | 1200W 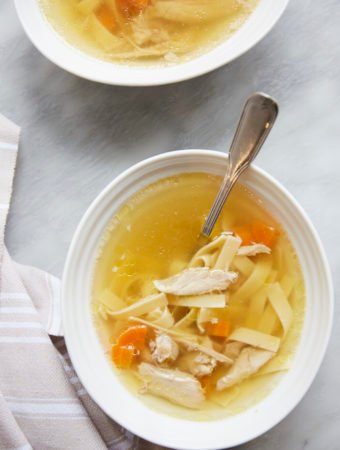 Many people have several liners for their instant pot, especially if you use it a lot and need to start prepping for the next recipe before the first one is done or if you want your meal (or chicken soup in this case) to cool in the pot but need to carry on and use the instant pot again.  I also specify in Step 1 to place all the veggies in the liner (rather than the POT) because you need to bring the liner to the tap to fill it with water and you don’t want to fill it with the line already in place, you could get water inside the pot itself.